This weekend i had planned to kick off my wild camping season with a overnight stay at Goats Hawse on the Coniston fells. Rewind 20 years to when i was a keen footballer, (where is he going with this i hear you ask?) and the game when my collar bone inconveniently decided to take a break!! Post operation i remember the surgeon saying that he had repaired the shredded tendons as well as he could, but that i should expect to experience problems as i got older! He knew his stuff that guy! Back in the present day and those problems are real! So with this in mind i felt a cold damp camp would probably not be the wisest decision to make. So a day trip it was. As a result i changed my intended route to a 10 mile bimble over the top of Coniston and up on to Great/Little Carrs to see the remains of an old Halifax Bomber up there. I`m pleased i did. More on this later!

I plotted my walk on OS digital maps Route here and took explorer map OL6 with me. Setting off a little later than normal to miss the wet weather that was forecast we arrived at the car park at the top of Walna Scar road at 11am. The car park was full already with eager Easter walkers. As Rocky and i headed up the path towards Low Water it was good to see so may families enjoying the great outdoors. Rocky loved being fussed over as we passed walkers coming and going 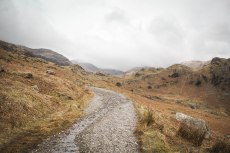 Arriving at Low Water we stopped for a break, and of course a swim in sub zero water for my crazy pooch!

There is still lots of evidence of the industrial days when Coniston was extensively mined for copper and slate. I always find it fascinating that people worked on these fells on a daily basis. Hard Hats off to them!

It was around this point at approx 500m that the conditions changed. The path up to the summit of the old man was shrouded in cloud, and there was clearly snow and ice still hanging around at the 700m mark. After a quick brew and the application of my micro spikes we were on the move again. The path was very busy and quite a few people coming down were warning those heading up of unfavorable conditions! As we approached the summit i couldn’t help but shake my head in disbelief at a converse crew of around 6 to 8 heading down on their backsides. How people attempt these fells in trainers is beyond me!!

The views from the summit were non existent but we plodded on towards Brim Fell using a compass bearing due to low visibility. There is a line of cairns to follow but they were proving difficult to see until practically tripping over them.

Shortly after leaving Brim Fell and heading up to Great Carrs my day was to change. As i approached a large rock i came across a family huddled behind it. two adults with their two young children. The Mother was practically laid on the floor trying to avoid the wind, both children were sobbing and looked so cold. The Father was trying to reassure them all would be ok! I went over to assist as i could see they were in some trouble. After a quick discussion with the dad it was established that although he did know the route they had intended to walk, he had no idea where they were on it and he wanted to get his family off there as soon as possible.

It was the only thing i could do to cut my walk short and escort the family down off the mountain by the safest route. As we walked down the Father said they had watched a tv programme showcasing Coniston, and they thought it would be a good Easter walk. They had no map, and no idea of the existing weather conditions up there!

As i left them to safely walk the rest of the way back to their car from Goat`s Hawse i couldn’t help but think of what could have happened to them up there! I do hope they have learned a lesson and that it has not put them off this beautiful place? It is so so important to carry a map and compass (and know how to use them), and to check on the weather before heading out. There is a vast difference between the lower areas of the lakes as there is higher up. This MUST be factored in to your walk…

I decided that i would head back up the mountain but change my route as i had lost too much time! Dow Crag was looking very inviting indeed.

A quick fuel stop at Goat`s Hawse on we were on the way up again.

Dow Crag is a popular fell for climbers and when you get on to the top and look down into the craggy gullies you can clearly see why it appeals. I prefer to keep my feet planted to the terra firma, but good for them haha

Looking down a gully

The Coniston Fells are the last of the Lake district giants before the land gradually slopes off into the Irish Sea. The 360 view from the top of Dow Crag could not be more varied because of this.

The weather was clearing now but the wind was still brutally strong! A quick descent of Dow Crag and we were back on the Walna Scar road. As we walked back towards the car with me singing to the dog, i suddenly remembered a photo i had seen on Instagram of a waterfall in an old quarry nearby. The photo was of it frozen during the recent beast from the East (1 or 2, i don`t recall which).

The map came out as i tried to locate it to pay a visit. Rocky seemed happy that the singing had stopped whilst i concentrated on the map!

Located on the map and it was a quick detour to Banishead Quarry. I am so pleased we visited, it is a beautiful place and well worth a look. 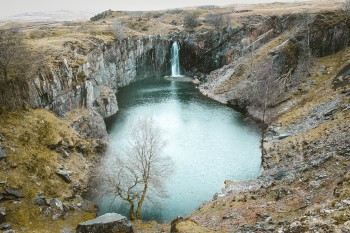 All in all we had a good day out in the fells in pretty poor weather conditions. I do hope Gary, Laura, Ben & Ellie enjoy the rest of their holiday here, and return to the Old Man in better conditions one day 🙂

This site uses Akismet to reduce spam. Learn how your comment data is processed.